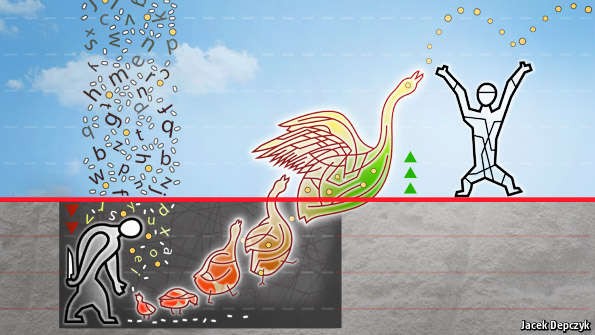 THE poor do not just lack money. They are also often short of basic know-how, the support of functioning institutions and faith in their own abilities. As a result, note Abhijit Banerjee and Esther Duflo of the Massachusetts Institute of Technology in their book, “Poor Economics”, published in 2004, it takes “that much more skill, willpower and commitment” for the poor to get ahead. No wonder escaping extreme poverty—usually defined as living on less than $1.25 a day—is so hard.

Even the most successful schemes to lift (and keep) people out of dire poverty seem to work only for some people, in some places, some of the time. For example, microcredit works best for the relatively enterprising, who are rarely the very poorest. Similarly, cash transfers linked to school attendance are useful, but require a working education system. What succeeds in one country may fail elsewhere, thanks to different conditions and cultural norms. And the poorest are often the hardest to help.

This dispiriting picture makes a new paper* by Mr Banerjee, Ms Duflo and several others all the more striking. It claims to have identified an anti-poverty strategy that works consistently, based on a seven-year, six-country study of more than 10,000 poor households. The secret, the economists argue, is to hand out assets, followed by several months of cash transfers, followed by as much as two years of training and encouragement. That formula seems to have made a lasting difference to the lives of the very poorest in countries as different as Ghana, Pakistan and Peru.

BRAC, a big Bangladeshi NGO that originally came up with this approach to tackle abject poverty, calls it a “graduation programme”. Given the many problems of the poor, the logic runs, it is useless to apply a sticking plaster to one while leaving the others to fester. For example, various NGOs, including Heifer International, Oxfam and World Vision, give cows, goats or chickens to poor people in developing countries, to enable them to earn an income selling milk or eggs. But what if the recipients are so hungry that they end up eating their putative meal ticket?

BRAC’s idea was to give those in the graduation programme not just chickens but also training on how to keep them, temporary income support to help them to resist the inevitable temptation to eat them, and repeated visits from programme workers to reinforce the training and bolster participants’ confidence. The economists studied schemes along these lines run by local NGOs in Ethiopia, Ghana, Honduras, India, Pakistan and Peru. The programmes all targeted the very poor: as many as 73% of participants in India and 66% in Ethiopia lived on less than $1.25 a day.

In all six places households in the programme chose an asset, typically livestock, as a one-off gift. In addition, they received enough money to buy a kilo of rice a day for as long as a year. They were given training not just on how to exploit their chosen asset, but also on keeping themselves healthy. Lastly, the NGO provided a safe way to save money, along with encouragement to do so. Although some details, such as the type of livestock people received, or the emphasis placed on saving money, varied from country to country, the nub of all six schemes was the same.

The results were promising. At the end of the programmes, roughly two years after participants first enrolled, their monthly consumption of food had risen by around 5% relative to a control group. Household income had also risen, and fewer people reported going to bed hungry than in control households. The value of participants’ assets had increased by 15%, which suggests that they had not improved their diets by eating their chickens. Rather, each person in the programme spent an average of 17.5 more minutes a day working, mostly tending to livestock—10% more than their peers. (The impact did still vary by country, being weakest in Honduras and Peru and strongest in Ethiopia.) Even more striking, the programme had strong, lasting effects on consumption and asset values even for the poorest tenth of households it reached—the poorest of the poor.

Perhaps most important, when the researchers went back and surveyed households a year after the programme had ended, they found that people were still working, earning and eating more. Were these gains to persist even longer—as they have in Bangladesh, where another study has been able to track people an additional year down the road—the researchers reckon that the graduation programme would have benefits of between 1.33 and 4.33 times what was spent on it. (The only exception is Honduras, where it did not break even, in part because the chickens that many people chose to receive kept dying.)

The costs of the schemes, which varied from $414 per participant in India to $3,122 in Peru, look daunting. But the help is intended as a one-off, whereas many anti-poverty drives in the developing world are never-ending. That makes graduation programmes cheaper than many of the alternatives. India, for example, spends about 0.3% of GDP every year on a workfare programme that reaches about 50m households. Reaching the same number of households through a graduation programme would be a one-off cost of about 1% of GDP.

Besides, it might be possible to achieve the same effect more cheaply. For one thing, it is not clear that all the elements of the programme are necessary. A recent study of a similar scheme targeting the very poor in Uganda found that more frequent home visits bring little extra benefit. This is the most expensive part of the programme, costing twice as much on average as the direct transfers. It could perhaps be eliminated or curtailed. Even as it is, the blight of abject poverty looks a little less intractable.