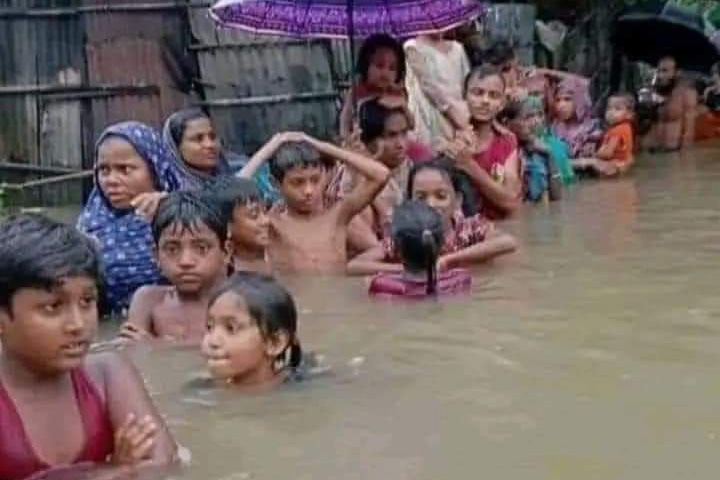 Calling everyone to come forward to deal with this humanitarian crisis

The non-governmental organisation BRAC has been working alongside local government since the beginning of the recent flood situation in the country. The organisation has allocated BDT 3 crore from its own funds for emergency flood relief. The money will be used to provide dry food, safe drinking water, oral saline, matches, candles, essential medicines and other services to people affected by flood. The money will also be used to rescue people trapped in the flood. Initially, the relief will provide support to around 52,000 families.

According to the Flood Forecasting and Warning Centre, the flood situation in northeastern Sylhet, Sunamganj and Netrokona could worsen in the next 24 hours. Meanwhile, about 80 percent of the areas in Sylhet and Sunamganj districts have been inundated.

According to official sources, floodwater has inundated seven upazilas of Sylhet district and five upazilas of Sunamganj.

For the relief effort, priority is being given to the women-led households, elderly, pregnant women and people with physical and mental disabilities. BRAC has also decided to temporarily suspend loan recovery from borrowers in the flood affected areas until further notice.

An estimated BDT 25 crore will be required for emergency support and rebuilding  efforts.  BRAC has launched a public appeal for humanitarian aid. Asif Saleh, executive director of the organisation, has called on all sections of the society to come forward and stand beside the vulnerable communities in the flood affected areas. Details of public donation are available on this website:  'Dakche Amar Desh': https://brac.net/dakcheamardesh/

More in this category: « BRAC's golden jubilee: 50 years of standing by people Bridge Schools show promising results in the time of pandemic but there is still learning loss in children’s education »
back to top