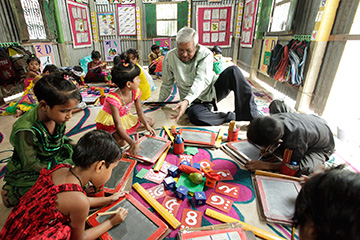 BRAC commemorates its founder Sir Fazle Hasan Abed on his first anniversary of death tomorrow on Sunday (20 December). Last year (2019) he died on this day at a hospital in Dhaka.

No elaborate events, however, will be organised to commemorate the day due to the ongoing Covid situation.

BRAC and BRAC University have organised online discussion sessions, paying respect to the vision of life and values that Sir Fazle cherished in his life. All the members of BRAC staff in their commemoration remember the eternal source of inspiration that the founder will continue to be in their life. They have pledged to stand beside the poor and marginalised communities and work hand in hand to build an equal for all.

Sir Fazle established BRAC in 1972 as a small relief and rehabilitation effort carried out in a remote area of Sylhet division. That organisation transformed itself to one of the largest and effective NGOs of the world through successful socio-economic programmes in many sectors carried out in last 47 years. BRAC now stands as a unique ecosystem interweaving microfinance, social enterprises, university, bank and multidimensional investments targeting the development of the poor and marginalised people. It now provides multifaceted services to over 100 million people in 12 countries of Asia and Africa, assisting them in bringing lasting changes in their lives.

About Sir Fazle Hasan Abed
Sir Fazle was born in 1936 in Bangladesh. He studied accountancy in London, qualifying as a cost management accountant in 1962. While he was working as a senior corporate executive at Pakistan Shell Oil, the 1970 cyclone and 1971 Liberation War in Bangladesh dramatically changed the direction of his life. He left his job and moved to London, where he helped initiate Action Bangladesh and HELP Bangladesh in support of the Liberation War.

Early in 1972, after the war was over, he returned to the newly-independent Bangladesh, finding the economy in ruins. The return of 10 million refugees who had sought shelter in India during the war called for urgent relief and rehabilitation efforts. Sir Fazle established BRAC to address the needs of refugees in a remote area of north-eastern Bangladesh, guided by a desire to help people living in poverty develop their own capacity to better manage their lives.

Today BRAC is one of the largest NGOs in the world, operating across 11 countries in Africa and Asia. Its primary objective is to empower people living in poverty and inequality. In 2020, for the fifth year in a row, BRAC was ranked first among the world’s top 500 NGOs by Geneva-based NGO Advisor; based on its impact, innovation and sustainability.

He has also been recognised by Ashoka as one of the ‘global greats’; and is a founding member of its prestigious Global Academy for Social Entrepreneurship. He was a member of the Commission on Health Research for Development (1987-90), the Independent South Asian Commission on Poverty Alleviation (1991-92), and the High-level Commission on Legal Empowerment of the Poor (2005-2008). In 2010, he was appointed Knight Commander of the Most Distinguished Order of St. Michael and St. George by the British Crown in recognition of his services to reducing poverty in Bangladesh and internationally. Sir Fazle was a member of the Group of Eminent Persons appointed by the UN Secretary-General in 2010 to advise on support for the Least Developed Countries. In 2014 and 2017, he was named in Fortune Magazine’s List of the World’s 50 Greatest Leaders. Sir Fazle was honoured with a Dutch Knighthood in 2019.

More in this category: « LGRD minister at seminar on urban development: Rural areas to be transformed into planned urban spaces to house rising urban population Data underscores that gender-based violence is rising with COVID-19 »
back to top