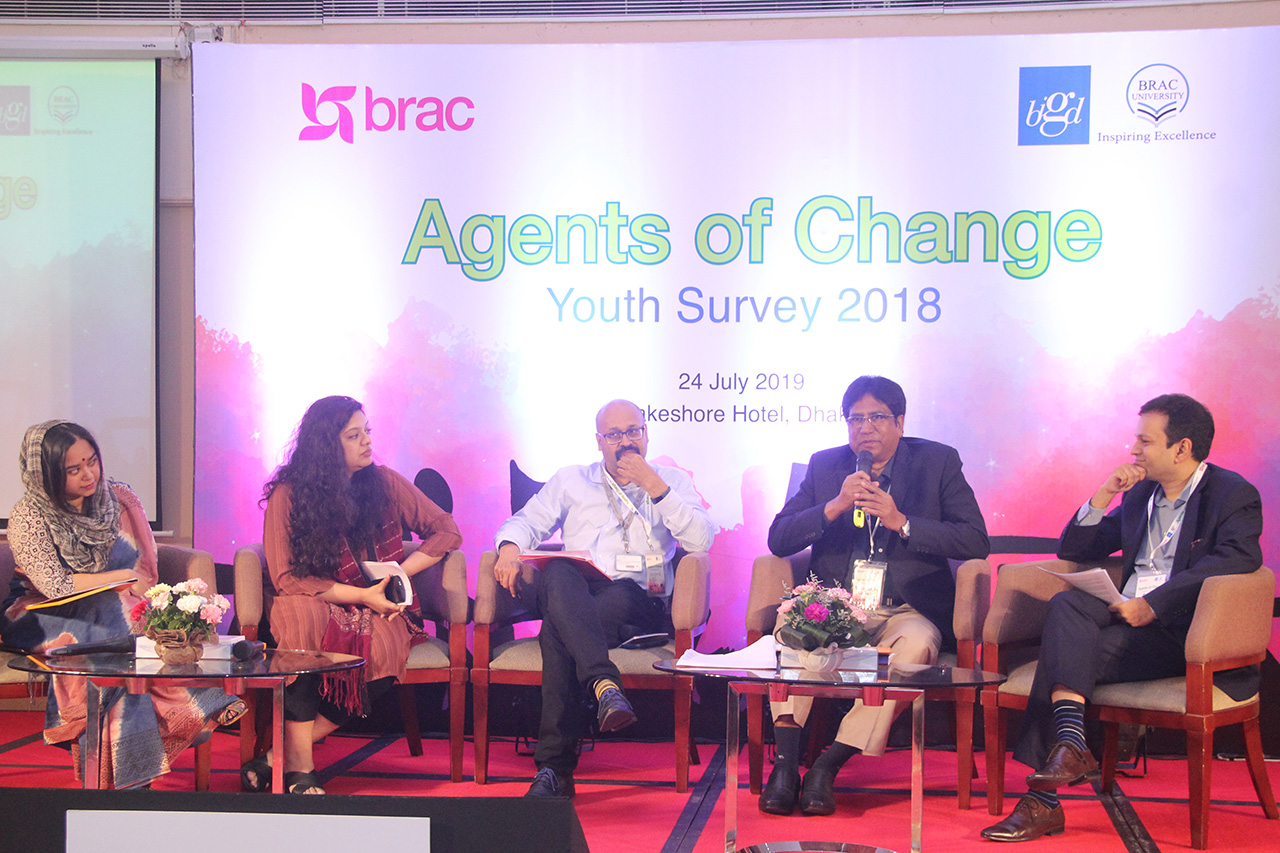 Most Bangladeshi youths (57% female; 42% male) see government jobs as the most viable career. Many educated young people from well-off families want to establish their own businesses. On the other hand, youths with no or less institutional education want to find work abroad to secure better earning. Moreover, only 5% of the respondents believe that their educational qualification will help them secure employment.

These are part of the findings of a survey among Bangladeshi youths BRAC conducted in 2018. The findings of the survey were released in an event on Wednesday (24 July 2019) at Lake Shore Hotel in the capital. Zahid Hasan Russel, lawmaker and state minister for youth and sports, Dr Md Jafar Uddin, acting secretary to the ministry of youth and sports, Asif Saleh, acting executive director of BRAC, and Dr Imran Matin, executive director of BRAC Institute of Governance and Development (BIGD), participated in a discussion at the programme.

Currently, Bangladesh is enjoying a unique historical period of "demographic dividend" with its working age population (15-59) way bigger than the non-working age population. At the same time, according to the Commonwealth's Global Youth Development Index Bangladesh is among the worst performing countries. Although there awareness about this issue is rising, there is a shortage of evidence-based information about what the country's young people are thinking and aspiring for. This youth survey is an effort to fill that gap.

BRAC, BRAC Institute of Governance and Development (BIGD) and BRAC University conducted the Youth Survey 2018 involving 4200 respondents. Bangladesh was divided into five regions, from which 30 upazilas were randomly selected. Two unions/wards were selected from the upazilas, from which one village or neighbourhood (mahalla) were taken. Finally, from each village/neighbourhood, 14 respondents (7 women and 7 men) were randomly selected. Following this process, a total 4,200 respondents aged 15-35 years were surveyed.

The survey focused on the self-identity, aspirations, institutional education, skills, choice and the preparation to enter employment of the respondents. Among the respondents, 7% male and 4% female had higher education and 14% had vocational training. Of the respondents only 16% were confident about their English language and computer skills. The confidence level among women and less educated respondents were lower than the average. Around 40% had access to internet, although urban spaces offered better access than the rural ones.

Of the educated youth, 57% women and 42% men want government jobs. Around 90% of the young men studied up to the higher secondary level and less were employed. The more educated the respondents are, the later they start earning. Only 5% women with education from 5th grade to upto higher secondary level are earning. Around 90% of the respondents who do not study, are not working to earn or not in any training programme are women.

Male respondents enjoy greater liberty regarding choice of their educational institutions, friends and occupation, mobility and spending money than women. Only 40% women have freedom of mobility, which is just half compared to that of men. All respondents are seriously concerned about two issues: gender-based violence (early marriage, dowry, sexual harassment and rape) and drug addiction.

Welcoming the BRAC Youth Survey 2018, state minister Zahid Ahsan Russel said, "Such surveys enrich our experience and help identify potential work areas. We are trying to overcome the problems gradually. Women's participation in wage earning work is increasing; more than 60% primary school teachers are women. The government has made a decision to set up youth research centres in different regions. These centres will offer assistance to the young people based on their problems, potentials and needs."

Youth and sports acting secretary Dr Md Jafar Uddin said some of the findings in this survey may look like problems, but they actually are not. Rather they should be regarded as challenges. "By overcoming these challenges, the nation will go forward through effective collaboration between the public and private sectors."

BRAC acting executive director Asif Saleh said BRAC has long been engaged in the skill development of young people, "Now we are on to introducing school-based learning programmes that will contribute to their future skill development."