02 August 2010, Dhaka. With the heavy rainfalls and the ensuing flood in Pakistan, BRAC has  temporarily halted its normal operations in Khyber-Pakhtunkhwa (formerly  the North-West Frontier Province) and is focusing on providing relief  work.  BRAC seeks to bring to the people of Khyber-Pakhtunkhwa our years  of experience in flood relief work in Bangladesh, a flood-prone  country. 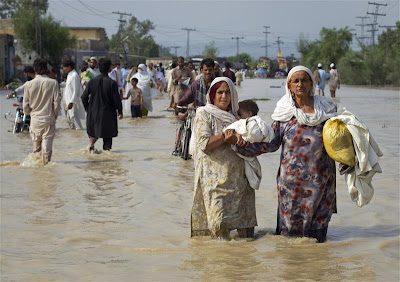 “We want to cover 4,000 families,” says BRAC Pakistan  CEO Mr. Faridhur Rahman, referring to the number of families to whom  BRAC aims to deliver food such as rice, lentils, and flour in the next  four days.  The shortage of food is acute.

To combat the threat  of diarrheal diseases breaking out, BRAC will also be distributing Oral  Rehydration Salts (ORS).  This is a staple commodity distributed by  BRAC’s health program in every country where we operate, including  Pakistan.  Additionally, BRAC will be sending a medical team for  assessment of health needs there.

Of the houses that are still  standing many are under water.  BRAC’s staff in Khyber-Pakhtunkhwa  expect the water to recede in 2-3 days, but “this part of Pakistan is  not accustomed to floods,” says Mr. Anisur Rahman, BRAC Pakistan’s  Microfinance Program Manager.  “In Bangladesh, we are used to this so we  can prevent casualties there.  But here the families and communities we  serve are not used to this.  We want to help because of BRAC’s  experience of dealing with floods in Bangladesh over the years.”

BRAC  Pakistan has been operating in Pakistan since 2007.  Of BRAC’s 12  offices in Khyber-Pakhtunkhwa, 9 are under water and 3 are of limited  use. However, BRAC’s existing infrastructure in Khyber-Pakhtunkhwa in  the form of branch offices and the extensive network of local staff give  BRAC a starting point through which relief will be delivered.

“Many  families that we serve have seen their houses washed away.  Many houses  of our staff members were also washed away.  But as a BRAC staff member  they can be effective in delivering relief to the families and  communities that they serve every day,” Mr. Rahman says.

“Vehicles  cannot go in to flooded areas, and there is a lack of boats in this  area.  We have no choice but to wade through water and deliver relief  supplies on foot where we can, even in flooded areas.”

Click here to donate to support BRAC's work in Pakistan.

More in this category: « Member of British Parliament visited BRAC’s Education and CFPR – TUP project in Shirajganj Update on flood relief in Pakistan »
back to top