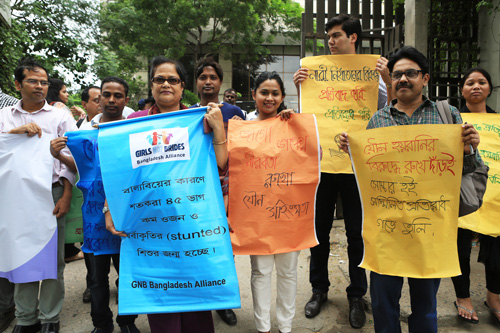 27 August 2015, Dhaka. On 14 April 2015 during the pohela boishakh celebrations around 20 women and girls were sexually abused in Dhaka University's TSC and Suhrawardy Udyan gate areas. Similar kind of incidents took place in different parts of the country on the same day, stirring the entire nation. Practices like child marriage, dowry and violence against women and girls are issues that Bangladesh continues to struggle with.

A national survey carried out by the Bangladesh Bureau of Statistics (BBS) in 2011, shows that as many as 87 per cent of married women reported having experienced both physical and psychological violence in the last 12 months.

BRAC expressed its stand against such incidents of violence and harassment and decided to organise a nationwide human chain, BRAC bondhon on every last Thursday of the month for 15 minutes starting from May 2015 until December 2015. People from other sectors and organisations, including onlookers, are also expressing solidarity by joining the BRAC bondhon.  So far BRAC has organised four human chains with participation from  70,000 BRAC staff and BRAC’s affiliated community members including government officials, community leaders, parents, students, teachers in all of 64 districts, and in an average of 2,326 spots around the country.

BRAC has been working to promote women’s empowerment and gender equality since its inception. The organisation takes an active stand against  harassment and sexual violence on women and children.

More in this category: « Sir Fazle Hasan Abed receives World Food Prize Bangladesh achieves the highest level of breastfeeding and the greatest increase in complementary feeding »
back to top