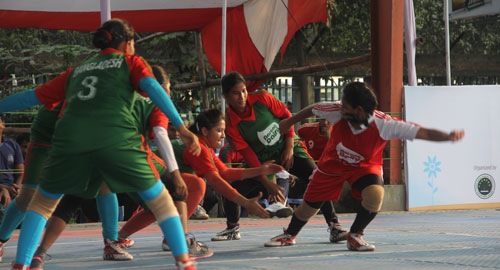 Institute of Kabaddi became champions of the Aarong Dairy Federation Cup Women’s Kabaddi Tournament 2015 by defeating Dhaka Wanderers by a scoreline of 23—21 in the final.  The seven-day long tournament, organised by Bangladesh Kabaddi Federation saw the participation of six teams, including three clubs and three divisional teams. Shraboni Mollick of Dhaka Wonderers was adjudged the best player of the tournament, while Rina Akter and Kazi Saheen Ara Brishti of the Institute of Kabaddi won the best defender and best raider awards respectively.

Sport, and particularly women’s participation in grassroots level sport, has become increasingly tied in with developmental theory and practice, as an opportunity for young people to empower themselves. The necessity for the kabaddi players to direct their own bodies with confidence on the court, and the realisation that their exertions bring them a form of success, increases the women’s self-esteem and belief in their ability to advance themselves. Team sports like kabaddi also involve learning and practicing the skills of collaboration and leadership, training that is particularly valuable to young women who may not otherwise have access to public leadership positions. In addition, sport is vital to young people’s physical health, and for young women in Dhaka, who are subject both to oppressive norms and urban overcrowding, events like the Aarong Dairy Federation Cup Women’s Kabaddi Tournament offer an important space for play.

The tournament combined this intention for progress with roots to heritage, as kabaddi, despite being less popular than cricket and football, is Bangladesh’s national sport. Speaking at the occasion, Ashok Kumar Biswas, secretary of the National Sport Council, pledged the government’s continued support for kabaddi and asked other private and non-governmental organizations to follow the lead of Aarong Dairy and come forward to support the sport.

More in this category: « BRAC WASH : learning from WASH experiences in Bangladesh Chevron Bangladesh Launches Enterprise Development Pilot with BRAC »
back to top