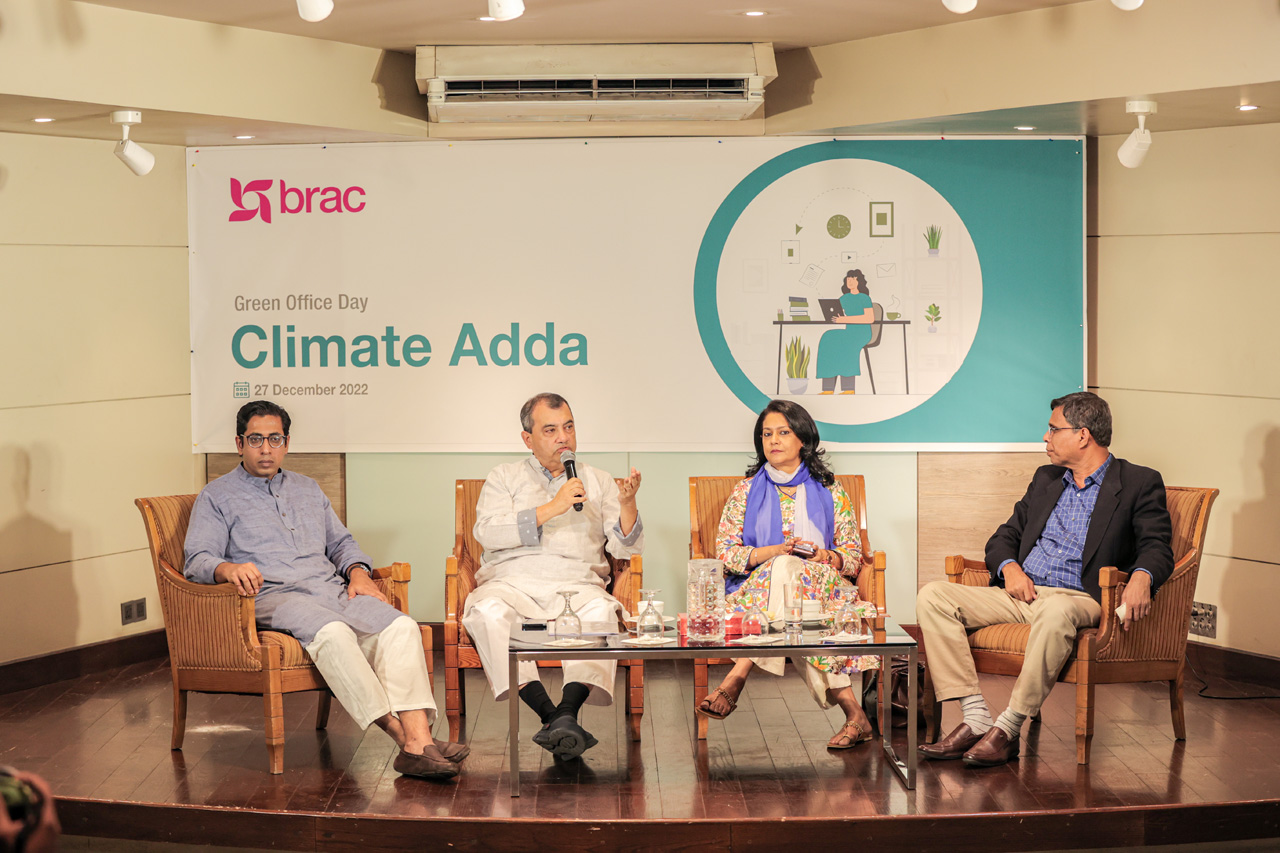 "Green Office Day" was celebrated at the BRAC Center of the capital on Tuesday, 27 December with the aim of reducing harmful carbon emissions and raising awareness of environmental protection. As part of this event, keeping in mind the theme of "Carbon Footprint Reduction" a "Climate Adda" was organised.

The organiser of the event says, the Adda was aiming to bring together in one discussion two essential ideas of “Moving towards a Carbon-Neutral World” and “Youth Engagement” as a pivotal stepping stone in taking our overall objective forward at BRAC which is to raise awareness on carbon footprint reduction and in contributing towards BRAC’s aim of becoming carbon-neutral in the near future.

“Climate Adda” mainly involves lively discussions to identify and acknowledge the problems at hand, which is the increasing carbon footprint leading to more global warming; how feasible and challenging are the solutions towards "Carbon-Neutrality"; and apart from this, how the steps can be taken to make a difference – were also discussed in detail.

Mr. Saber Hossain Chowdhury said, “at this year's COP conference, we talked about an important gap. That is, lack of trust, faith. If developed countries do not keep their words, then we will not be able to move forward in any way towards the future. There is even no definition of what we mean by climate finance. Developed countries claim that they gave us $80 billion last year. However, according to the data of neutral organisations, it is not even $20 million.”

Mr. Nahim Razzaq says, “The carbon footprint is something we can all play a part in controlling. Be it in our home or outside home through behavioural changes. Unfortunately, we have yet to influence behavioural change. Especially those who are young need to be included in this process. National consensus and guidelines are needed.” He suggested adding climate change as a chapter in textbooks and curricula.

Advocate Syeda Rizwana Hasan said, “We have a lot to do from individual to social to state levels. We can emphasise on the use of public transport over the use of private transport. Then the role of the government should be to improve the public transport system. Bicycle lanes should be introduced to encourage the use of bicycles. Young people should come forward with proper leadership. To be able to be more climate-friendly we need to reduce consumption at personal and state levels. Youths have to raise questions on the safety of food and air.”

To sum up the discussion, Dr. Md. Liakath Ali said “BRAC has been at the forefront of reducing the organisation’s carbon footprint. One of the major initiatives successfully taken up in recent times has been the ban on single-use plastic within the organisation. In addition, we also discontinue the unnecessary use of items made of plastic including communication materials, encouraging paperless communication, and other climate-friendly energy resources, in an endeavour to save our forests — and, our planet.”

In the discussion, guest speakers talk about the global perspective on climate change, the role of the current government and the role of BRAC in this regard. How to engage our young generation, how they can play a more active role in the goal of building a carbon-free world, were discussed.

At the end of the discussion, members of the Popular Theatre, Social Empowerment and Legal Protection (SELP) Programme of BRAC performed Gombhira, a type of song originating in northwestern Bangladesh. BRAC officials, members of BRAC Youth Platform, and alumni of the Aamra Notun Network (ANN) under the BRAC Youth Platform participated in the programme.

More in this category: « “Build a world of play” campaign celebrates Play Labs BRAC to organise ‘Hope Festival’ in celebration of the tenacity and bravery of the people of Bangladesh »
back to top