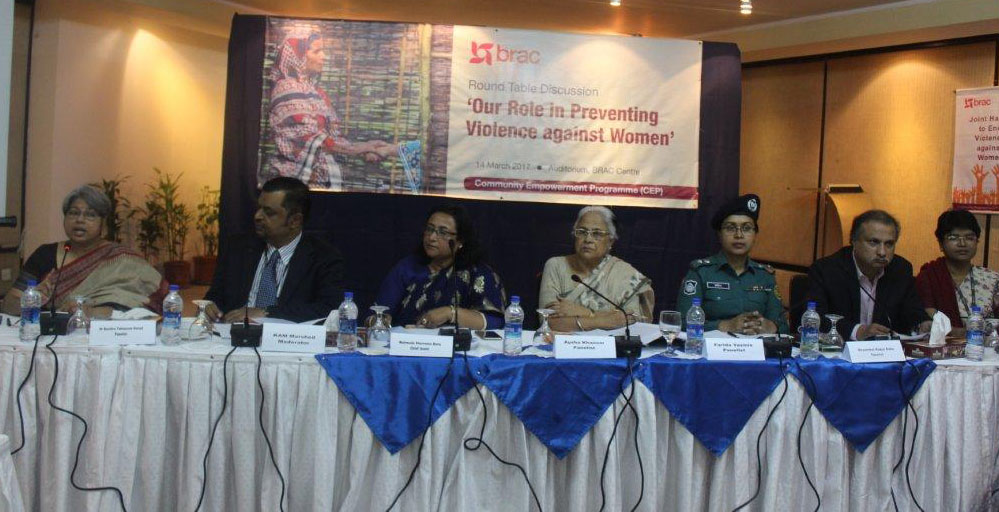 A total of 7,489 women and girls have been experienced multiple form of violence during January to December 2016. What is most alarming about the report is that the rate of child victims is 20 per cent of the total violence against women occurred during the period. Every day 1.7 child below the age of 18 have become victim of rape incidents.

BRAC community empowerment programme today organised a roundtable discussion at the BRAC Centre’s auditorium to share key findings of incidents of violence against women as documented by the programme.

Violence against women in different ways has been a common weapon to control women and this is becoming a common practice under patriarchal culture. The BRAC report shows that a total of 7,489 women and girls have been experienced violence last year. Every day on an average, 20 women and girls became victims of violence. Most frequently reported type of violence are (highest to lowest): physical violence (67 per cent), sexual (19 per cent) and mental/psychological (14 per cent). Most frequent form of violence is physical torture (4,344) of total reported incidence followed by rape and gang rape (874)), suicide (835), murder (481) and attempted rape (310). 82 per cent violence occurred in domestic sphere and 18 per cent in public sphere. Highest number of violence recorded in Jessore (351) followed by Satkhira (288), Narsingdi (280), Potuakhali (252), Mymensingh (248), Feni (220) and Rangpur (219) while the lowest was from Madaripur (34). Among all incidents, 26 per cent case filed, 7 per cent resolved in shalish and 39 per cent was under process and 28 per cent did not file any case or did not take any legal actions.

BRAC community empowerment program (CEP) identifies and reports incidents of violence against women from 55 districts of Bangladesh. This is done through its network of 12,350 ward-level and women-led institutions called Polli Shomaj. The victim or victims’ family, neighbours, and Polli Shomaj members send reports to BRAC head office, and maintain a database.

The Chief Guest, Mahmuda Sharmeen Benu said, “Violence against women is not only for the problem of women, it is also the problem of men as well. Need to work collaborately to end violence. Considering it, we have taken initiative to form `adolescent club’ in all Unions. We have also taken initiative to empower women in promoting entrepreneurship in 18 different businesses in 490 upazillas.”

Panel discussant Ayesha Khanam said, now different preventive initiative has been taking from GO and NGO but it is not sufficient considering the vulnerability. We need to work in a holistic approach to prevent violence. She also said that we have laws but most of the people, even those who are implementing, do not know about the law. She emphasised on proper implementation of the law.