"If we can get people to the Moon, we can end poverty at home" At the plenary titled Going the Last Mile, Dr Joanne Carter, executive director of RESULTS and RESULTS Educational Fund, recognised Sir Fazle and Dr Kim as two global leaders and practical visionaries who did “what the world had said was too hard or even impossible”, played a critical role in fighting tuberculosis, and had what it will take to get to the last mile in ending extreme poverty.

"One of the great tragedies is that not enough people in the world know about @BRACworld ". #Voices4RESULTS plenary session @WorldBank

Both Sir Abed and Dr Kim highlighted the role that women can play in fighting poverty, and the need to mobilise them as ‘agents of change’ for poverty alleviation.

"If women manage poverty why can't they manage development? We see women as the main agents of change"- Sir FH Abed #Voices4RESULTS

In his closing remarks, Dr Kim expressed his concern of rising aspirations everywhere;

“We are racing against time and the sense of urgency we have today is greater than it was ever before,” he said. “We have to get better at thinking about the foundations of human solidarity. We have to find a way forward. We have to commit and recommit to equality of opportunity,” he concluded.

Good to meet with Sir Fazle Abed of @BRACworld. I look forward to continuing our strong partnership. pic.twitter.com/wEDxST1Ec4

Representatives from BRAC presented the details of their graduation programme in a separate panel with panellists from the University of New Hampshire, Uplift and the RESULTS Educational Fund. This session provided the opportunity to understand the various forms of social protection and livelihood programmes and the need to make such programmes more comprehensive, adaptive and scalable in order to reach the extreme poor and provide them with better support to help escape poverty sustainably.

He holds the number 37 position on Fortune’s List of the World’s 50 Greatest Leaders and has won an incredible number of prestigious awards. He is the founder and chairperson of the world’s largest private development aid organisation, with 100,000 employees in 11 countries and a budget of one billion dollars. He is 81 years old, and his biography reads like an adventure novel. After 45 years, the ongoing success of his NGO called BRAC offers a convincing response to those cynics who declared development aid a thing of the past. His name is Sir Fazle Hasan Abed and De Dikke Blauwe spoke to this architect of poverty reduction during his visit to the Netherlands in mid-June. read more

This article was published in the Daily Observer, Liberia on 1 June 2017

The training was held in Kingsville, Careysburg district, Montserrado County.

Facia Goah, nutrition focus person for Montserrado County at the Ministry of Health, appreciated BRAC for involving community organizations in the fight against malnutrition.

She added that diet diversification is one of the major challenges to reducing malnutrition in the country.

"Our people are used to eating one kind of food, and parents are encouraging children to eat the same food. However, encouraging people to eat varieties comes with huge collaboration," she said. BRAC in Sierra Leone celebrated the World Day for Cultural Diversity for Dialogue and Development across the country. All area offices, branch offices and the country office got involved for the occasion.

The country office celebrated the day at the famous Aberdeen/Lumley Beach with cultural events, food, and sports and games. Representatives from each ethnic group in our offices talked about their cultural practices, norms and values of their respective tribes, followed by music and dancing. The executive director for BRAC International, Mr Faruque Ahmed visited BRAC in Liberia from May 9, 2017 to May 12, 2017. During this time, he visited several project sites and met with some of the beneficiaries and staffs of the programmes, including microfinance, early childhood development and cash for work. Mr Ahmed met with Her Excellency President Ellen Johnson Sirleaf to discuss how BRAC can provide a platform for the Government to achieve their goals. He also held meetings with various other Government officials and donors in the trip, including the Minister of State for Presidential Affair Mr Slyvester M. Grigsby, the Minister of Agriculture and the Ambassador and Delegates of European Union to Liberia.

Mr Ahmed concluded the trip by spending time with the team in Liberia and engaging in some lively discussions with the staff. BRAC International celebrated World Cultural Diversity Day on May 21, 2017, across its countries, as well as at the head office in Dhaka. The staff in Dhaka was joined by the second batch of international Young Professionals, who are visiting on training purposes. Mohammed Madaty as best dressed with his award

BI hosted a small ceremony where people were encouraged to dress up, representing a culture of their choice. It was a very colourful event with attires from all corners of the world. The event started with the Head of Communications, Ms. Shehzeen Chowdhury giving her take on diversity, explaining how BRAC International gains its strength through the presence of various ideas and thoughts from different cultures and traditions. Her sentiments were echoed by more speakers who shared similar sentiments.

After talking about diversity for a bit, a vote was taken to establish who was the best dressed for the day. The winner was Mr. Mohamed Madaty, one of our Young Professionals from Tanzania. Mr. Madaty expressed his gratitude at winning the award and dedicated it all his colleagues.

BRAC International prides itself on its diversity and continues to foster an environment which is welcoming to people from all walks of life. On 13 May, bus drivers and transport association leaders at the Mohakhali bus terminal took pledges to keep the speed of their vehicles below 30 kilometre per hour while passing schools, hospitals, residential areas and on roads with mixed traffic of non-motorised vehicles and pedestrians. A total of 5000 bus drivers, transport association leaders, operators and administrators are expected to take part in this week-long activity. This is part of a campaign that was organised by BRAC on the eve of United Nation Global Road Safety Week 2017 which was observed during May 8 - 14 across the world. This year's UN road safety campaign theme was "Save Lives - #SlowDown". This was followed by a motor cycle rally involving 200 bikers who carried colourful flags, placards and banners that boldly displayed UN's campaign slogan. During the rally, they engaged with drivers of buses, cars and three-wheelers to spread the message of slowing down speeds to prevent loss of lives. 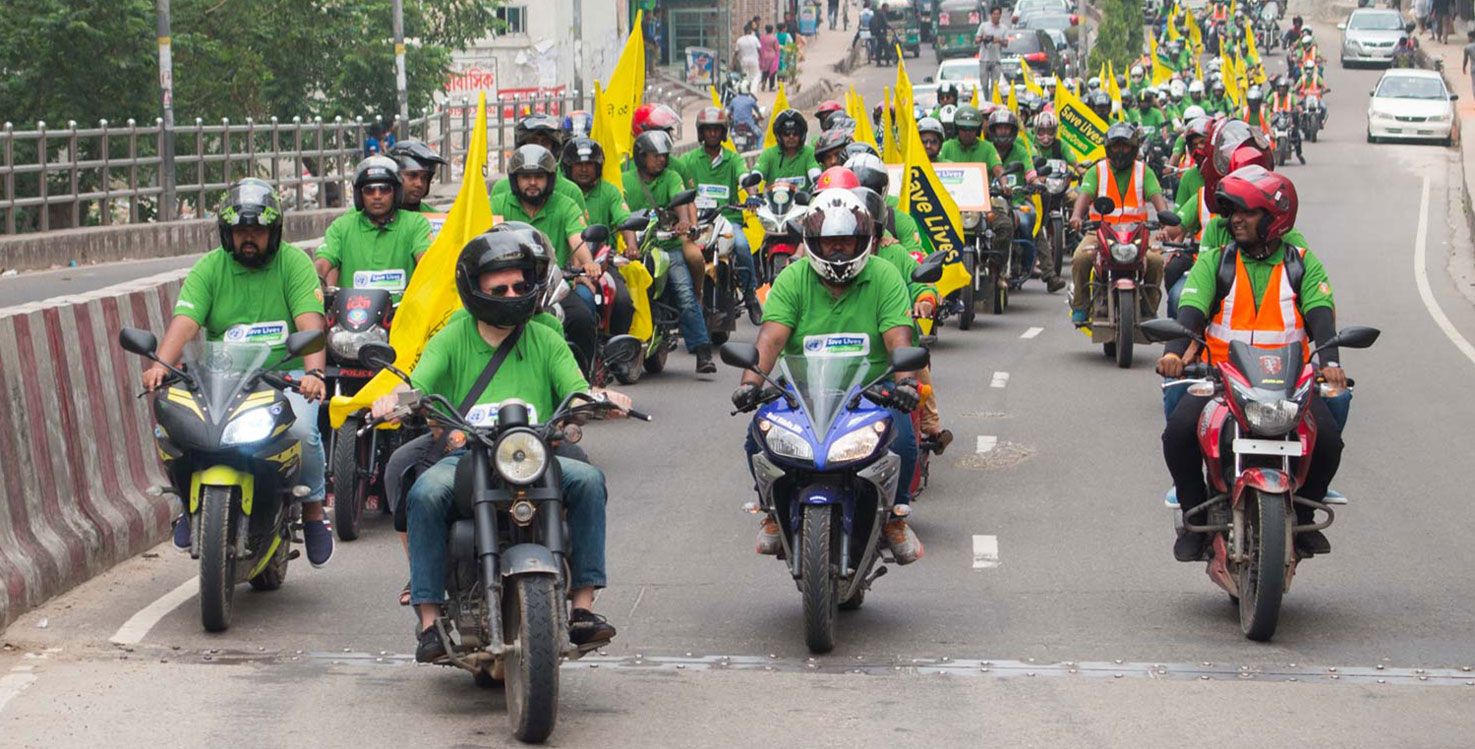 BRTA's chairman said the high speed is the key reason behind deadly accidents. Safe speed of vehicles could help save hundreds of lives every year.

Winther said the campaign will draw the attention of the policy makers about the burning issues related to road safety and will develop simple, low-cost interventions to address these. He urged the drivers for going slow, saving lives of both others and themselves. Najmul Hussain stated that BRAC for years has been raising community awareness about road safety, training drivers and driving instructors, and doing research to improve road safety in Bangladesh.

We mourn for Faruq Ahmed Choudhury BRAC deeply mourns at the demise of Mr Faruq Ahmed Choudhury, former adviser and governing body member of BRAC. He passed away on May 17, 2017 at 4.30 am, in Square Hospital, Dhaka at the age of 83.  He left behind his wife, a son and a daughter.

Mr Faruq Ahmed Choudhury, was born in January 4, 1934 in Assam, India. Throughout his successful career, he served the Bangladesh Government for two decades and occupied the roles of foreign secretary and ambassador.

He joined BRAC as an advisor in 1992 and continued to work with BRAC until 2006. His contribution played a key role in BRAC’s expansion and growth. He was also a governing body member of BRAC, a trustee board member of BRAC University and the chairman of Delta-BRAC housing company. The additional secretary Government of Sindh and the head of curriculum wing of Sindh, Dr. Fauzia Khan, inaugurated a BRAC Primary school in Baldia Town, Karachi.

BRAC in Pakistan, with financial support from DFID, has established 300 non-formal schools for out-of-school, marginalised children in April 2017. 9,000 learners have been enrolled in Karachi, Khairpur and Kambar Shahdadkot districts of Sindh province. During the opening ceremony of the school, Dr. Khan appreciated BRAC's efforts to provide education to out-of-school children, especially girls. She addressed the community and parents, and she encouraged learners to put their heart and mind in their studies. She also welcomed new admissions to the school and met with the school management committee members. “This project will significantly improve the net enrolment rate of Sindh province," she exclaimed, and pledged to extended the full support of the Government of Sindh for the capacity building of BRAC’s teachers.

BRAC in Pakistan has started 1,500 primary schools and enrolled 46,566 out-of-school children in the rural and urban slum areas of Sindh. 5,493 learners were successfully graduated and mainstreamed into middle schools with the help of the Education and Literacy department of the Government of Sindh.