We built our dream home – it not only looks beautiful, but also saves lives

Living behind the ‘Made in Bangladesh’ label

I work to keep your cities clean: Mahmuda

Growing up, I often witnessed people losing their homes to cyclones and floods in our village. Years later, I was living in fear of meeting the same fate.

I lived in a makeshift house in an informal settlement in Satkhira, south-western Bangladesh. This area is infamous for its vulnerability to climate-prone disasters, especially due to its geographical location.

I had given birth to my first child a few weeks before Cyclone Aila hit in 2009. I remember our home being inundated in floodwater. It was difficult to commute or do any household chores. But what we were more worried about was the fact that we had a newborn at home. That was when we began thinking about building a secured house.

We had inherited some money and a small piece of land from our parents, but building a house required more money than we could afford.

One day, I heard about BRAC’s housing loan from a group of women in my village. The loan was given to build safe and affordable housing for people living in informal settlements. I consulted with my husband and got in touch with BRAC’s staff members and the city development federation leaders to learn more about the procedure. They told us we could borrow a loan with a low interest rate, and repay in small monthly installments over a period of three years.

To prevent our house from flooding during heavy rainfall, BRAC’s staff members suggested we build the house on a raised plinth. After two months of hard work, our home was finally ready.

The money that we used to pay the rent in our previous house is now used to repay the loan installments every month. I am raising my children in the safety of our own home, and heavy rainfall and cyclones do not frighten me anymore. 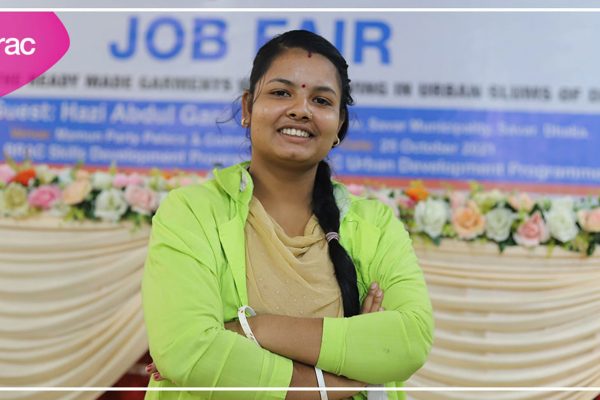 My job is not a typical one for university graduates: Suchana Das I work to keep your cities clean: Mahmuda