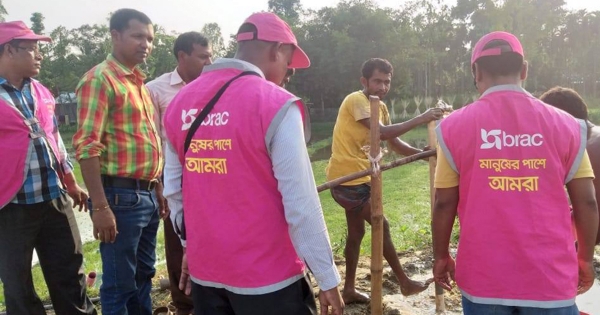 Non-governmental development organisation BRAC has allocated BDT 50 lac for flood relief operations across Bangladesh. Until 22 July, the organisation has distributed dry food and cash assistance among 8,659 families in 34 worst affected upazilas across 11 districts. With the new allocation, the operation will now be expanded to all flood-affected districts.

Although water is receding from some of the districts, the flood could linger for a longer time, especially in the northern and central regions of the country. In this emerging humanitarian crisis, BRAC has launched a coordinated effort in order to ensure timely response in the form of relief, deploying several thousand relief workers in some of the worst affected districts.

BRAC has expanded water, sanitation and hygiene support to schools, embankments and highways in Bagura and Gaibandha districts where hundreds of thousands of people have taken refuge. Everyday, new sanitary latrines, bathing cubicles and tube-wells are being built to cope with the rising demand.

“We are focusing on remote areas, especially where conducting relief operations have become difficult as a result of damaged communication system. We are doing a quick needs assessment of affected families, so that we can expand our operations rapidly,” said Asif Saleh, Acting Executive Director of BRAC.

People in Ulipur of Kurigram, Sarishabari of Jamalpur, Kalmakanda and Barhatta in Netrakona, Sylhet Sadar and Sariakandi of Bagura district are the latest upazilas to come under BRAC’s relief operations coverage.

"We are coordinating our operations to complement the government's relief efforts. If the situation does not improve soon, all concerned should come forward to support various government and non-government efforts,” Asif Saleh added.